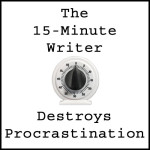 When he twists the knob on the timer, The 15-Minute Writer undergoes a sublime transformation.

The sounds of the world dissolve, images fade.

He puts his fingers on the keyboard and looks at the screen.

He moves his fingers and words appear.

He may pause to think, for a moment, about what he wants to say next.

He is calm, because he is doing nothing for the next segment but writing.

And the words come, into his mind, through his fingers and onto the screen.

He is writing, for the 15 minutes he has given himself. He is no longer procrastinating, because he is working.

And because he is working, he is not a procrastinator.

He is a writer.

Because he is writing.

He has destroyed procrastination with a simple ritual – twisting the knob on the timer and starting the mechanism.

The mechanism that transports him from one state of mind to another. All the time, every time.

As he continues to practice this simple ritual he rebalances the scales.

He works more and procrastinates less.

And the more he works, the less it occurs to him to procrastinate.

And the less he procrastinates, the more he enjoys the work.

And the more he enjoys the work, the less he thinks about the times he used to procrastinate.

And the less he thinks about the times he used to procrastinate, the more he is just the person he wants to be.

And the more he lives as the person he wants to be, the less he has to think about twisting the knob on the timer.

He just sits down to write, 15 minutes at a time.

If you would like to take The 15-Minute Writer course to train your mind to destroy procrastination, click on the button below this text. You will receive immediate access to the 40-day course with timed writing modules, the complete PDF of The 15-Minute Writer, and begin receiving the 40-day email sequence.

The information you need to start your own information publishing business – mailed to you monthly!