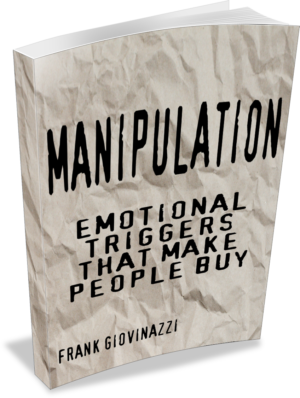 Have you ever heard the phrase, “it’s just business?”

It’s usually delivered after someone gets wiped off the board.

Sometimes a neutral observer delivers it, which softens some of the sting.

But then there are times when the victor stands over the crumpled body of his defeated opponent and says it with a sneer.

And that’s when it really hurts.

What is the loser thinking at that point?

That the other guy had more money, or better connections, or “stole” a big customer and so on.

I knew something he didn’t. And I used it to win.

Because that’s what business is, isn’t it? It’s about winning.

Business is about winning the dollar in the customer’s pocket, about dominant market share, about free publicity and so on.

And you do that, all of that, by knowing something your opponent doesn’t – and using it to win.

When it comes to marketing it might appear that everyone is working with the same skills. If it was an arms race it would be a standoff with each side launching their best day after day, fighting over the same piece of ground.

And at the end of the day, companies go home, count up their wins and losses and say to themselves, “there’s got to be a better way.”

So they go over their marketing, tweaking headlines and benefits, trying this and that small improvement. Split testing is the rally cry from the trenches!

But what if there were a way to make a big move, one that was so unexpected and took your competition so utterly by surprise they curled into the fetal position waiting for you to tower over them and say, “it’s just business”?

I’m pleased to tell you that way is here. It is simple, even obvious.

And all it will take is a few hours of your time.

MANIPULATION is our program that takes you into the deep secrets of your customer’s motivation. The things he is thinking about late at night, that he won’t admit to his wife or colleagues.

The things that make him buy.

The emotional triggers that make him buy in a white heat, fumbling for his credit card while holding his breath just so he can make the damned purchase – because you have reached him at such a deep level it just might be that he doesn’t even know what he’s buying!

He just knows that it’s going to satisfy that primal urge that you have shown him in the mirror of his soul, the image he doesn’t dare show anyone else. Most of the time he won’t even admit to himself that it even exists.

What I am talking about are the emotions that really drive customer decisions.

MANIPULATION is a 6-hour course that lays them out for you, to study, and think about in such a way that you can present your product in a way never presented before.

You are going to show your customer how to satisfy these emotions simply through the act of buying your product. You are going to do so easily, with simple language and images so that he feels as if you are reading his mind.

All it takes is a little shift in your own thinking. You are, right now, going to stop thinking about trying to get your customer’s dollar. That comes later, after you spend some time thinking about the emotions that drive him, the ones that make him feel inadequate, or powerless or afraid.

You are going to think about the emotions that make him move his arms and legs like a puppet on a string.

And you are going to pull those strings.

This is the unfair advantage that business people dream about. The one that is virtually free to acquire and easy to use.

Once you put it into play your competitors, such as they are, will watch as you leave them in the dust. Best part is they won’t understand what you’re doing.

Yes, they might try to copy you, even steal some of your lines.

You won’t be worried in the slightest. Because while you let the lawyers sort that out, you’ll be working on the next way you’re going to trigger your customer’s emotions.

Armed with the dozens of emotional triggers you’re going to come to know in the MANIPULATION program, you will have an endless arsenal of ways to trigger your customer into buying from you.

One of the best parts of targeting your customer’s emotional triggers? They will love you. They will feel you understand them. That you have their best interests at heart.

Heck, they might even think you’re a great guy. (Engendering affection is one of the secret benefits of directly targeting your customer’s emotions. They think you really, really like them.)

While some might say MANIPULATION is an advanced program, we beg to differ. We’ve laid out some of the basic principles in this message that only took a few minutes to read.

The program itself, delivered in audio format, is broken down into 5 to 8 minutes segments. Each concept, every emotion is described in such a way that you will recognize every thing we’re saying.

The difference will be that you are now taking some of what you may know, subconsciously, and literally weaponizing it.

You can think of it in the same way you do when you look out an airplane window and see those semicircles of suburban houses from 30,000 feet and say to yourself, “how do I get a dollar from each one of those?”

MANIPULATION is the way. Emotional triggers are the things your customers really buy, day after day, whether it be cars, razors, clothes or watches. They are buying their emotions. (And this is why, when you target their emotions, they feel like you are reading their mind.)

Once you understand that, and start to put it to work in your marketing, you will have the unfair advantage that will earn you the right to say, “it’s just business.”

When you fill out the form below, you will be directed to the Exclusive Member’s Area (the one your competitor doesn’t know about). You can start listening to MANIPULATION in the next 3 or 4 minutes.

And in just a short time you will be doing things with your business that you never dreamed about, and that will leave your competitors quaking in fear.

See you on the inside,
Sincerely,
Frank Giovinazzi

Get our FREE CHEAT SHEET on How to Create Million Dollar Products!

Join the exclusive club of people who love what they do!