Home » Here’s stunning proof you can use the same emotional trigger to sell vastly different kinds of products! 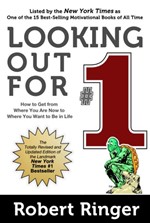 Robert Ringer wrote a couple best-selling self-help slash finance books in the 1970s. A devotee of Ayn Rand-style thinking he advocated hard work and yes, looking out for #1.

The title evokes several emotional triggers about competition, greed and narcissism. Doesn’t matter what’s in the book for this discussion – the title is doing most of the work in getting the customer to open his wallet.

The bold statement of the title also does something very special for the prospect – it gives him or her PERMISSION.

For the budding sociopath, or garden variety selfish individual, Looking Out For #1 says the following:

Giving a customer PERMISSION is an emotional trigger that gives them relief and puts a smile on their face. All along they have been harboring this belief, or desire, and perhaps been holding back, or doing it in secret.

Having been granted PERMISSION by a product or just an advertisement is a form of validation. It emboldens the customer and sets them free. Makes them feel less freakish, especially in relation to desires that might be sensitive according to either the norm or their environment.

When you give a customer PERMISSION to do what they want to do or be who they want to be you are gaining a loyal friend and creating a bond because you are someone who says they are OK. The result is not just a sale but a convert – because now that they have PERMISSION to do what they secretly desire they will defend you because you have set them free.

In this case, it is PERMISSION to admit or explore different kinds of sexual fantasy. The book is saying, rather explicitly I understand, that is it okay to let your freak flag fly.

Just as in the case of Robert Ringer, the book got fans who were secretly indulging in the kinds of fantasies described in the book – and what a relief it was to people who were keeping it a secret!

Fifty Shades had other emotional triggers of course, such as CONTROVERSY, MYSTERY and being a FAD.

But one of the strongest in my opinion is that it gave its readers PERMISSION to engage in the kind of sexual life that they were either already practicing or fantasizing about.

Of course, in both cases most of the readers used that PERMISSION to continue fantasizing, either about getting rich or having kinky sex. But the fantasy was normalized for the customer with the purchase or reading of the book because it gave them PERMISSION that it was okay.

So there we have it – two different products that both used the emotional trigger of PERMISSION to entice the audience and generate sales.

This means that PERMISSION, like all emotional triggers, can be used for different types of products.

There is a classic old Rolls-Royce ad for example, that directly addresses a wealthy list of people who have not yet purchased a Rolls. The ad explicitly states something along the lines of, “you have the money … and yet you hesitate …” The purpose of that ad is to give qualified customers the PERMISSION to go ahead and splurge on a Rolls-Royce.

And we have a more recent example, that of a music school, that appealed to adult students with this line:

Do you regret giving up on piano lessons when you were a kid? We have a teacher who specializes in adult students so you can finally do what you’ve been meaning to do for all these years!

This block of copy includes PERMISSION for adults to go back to taking piano lessons, but it also clearly includes other emotional triggers such as REGRET and SHAME – which brings me to my next point: Your success as a marketer depends on your ability to identify and STACK as many emotional triggers into your message as possible!