SIX WORDS CAN MAKE YOU RICH! 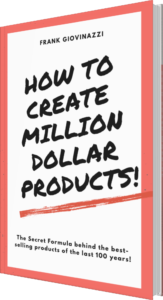 On a clear night in Cheyenne, with C-130s rumbling overhead, the answer I sought literally dropped out of my mind – fully formed!

Like you I was interested in making my fortune as an entrepreneur. Even had some moderate successes that provided a decent lifestyle for my family. There were a couple misses along the way, but nothing that I couldn’t handle.

But I had figured out, again maybe like you, that struggling to make a living as my own boss wasn’t really much different than having a job. There were times when it was a lot more stressful, matter of fact.

So I had pulled back from my business efforts for a time. Decided that if I was going to take the plunge, that this time it would have to be a hit – a multi-million dollar sure thing.

The science of creating million dollar products can be taught!

Like I said, I found the answer. It is simple and it is repeatable.

I’m writing this letter to you in a public library and there is a homeless man sitting in the cubicle across from me. I am 100% positive that I could teach this method to him – and that he could put it into use and create a better life for himself.

The catch of course is that he would have to be willing to put in the little bit of effort necessary. And because I’ve done most of the work already it is very little work indeed.

But before I tell you about this simple secret to creating million dollar products, let me give you a little background about how I came up with this breakthrough.

Bear with me, there are lessons to creating your own breakthrough products in this short tale.

The not so glamorous world of a cyber security expert

In my work as a DoD Analyst, we collect large datasets – terabytes at a time. Our task is to decipher what’s happening and use that to protect the lives and capability of our 350,000 person force.

The data is overwhelming. Often it makes no sense at all. When there is a glimmer of hope, we find something else that contradicts what we thought we knew.

Then there’s everyone’s opinions, and god bless ‘em, but Generals have some real beauts!

It’s frustrating, but we keep at it. The stakes are too high to quit.

The best day is when we come up with an answer – and can teach it to the people in the field.

The greatest day is when we can teach it to one of our people in a manner that so simple they can pass it on to the next soldier. We know we’ve done our job when we see it working in the field.

So what does this have to do with breakthrough marketing concepts?

I applied the same scientific approach to studying million dollar products as I do to my day job.

And because, like you, I wanted to make my own fortune, it was deadly serious.

And I did things most people wouldn’t do – went back a hundred years, looked in obscure corners of the Internet, even, aghast, dug up books and periodicals that most of today’s generation of marketers have never heard of.

Along the way I asked myself a simple question – what do these million dollar ideas have in common?

And how do I come up with one of my own!

How the silhouette of a BEAST inspired a eureka moment!

Remember I started this letter about that night in Wyoming?

When I saw the C-130s taking off and landing on that cold evening, I had been “cooking” with my project for a couple months. And I was at the point where I knew I was close – could almost touch what I was after – but it was still just out of reach.

If you’ve been in the military, you know what a C-130 is – there is nothing else like it. It projects force by its sheer size and sound. Our adversaries have also come to know what they mean – Big Daddy’s coming, and he is pissed!

And sometime during watching those beasts going about their business, I realized that that was all it was:

Million dollar products tell you what they are just by showing up!

Consider the big hits, books like Think and Grow Rich or How to Win Friends and Influence People.

In both cases, you know exactly what they are as soon as you read their name.

The great thing about simple titles like these is they are appealing to those who are already interested in that kind of thing.

But they go a little deeper, don’t they?

When someone comes across these classics for the first time, and maybe even doesn’t know anything about “self-help,” the titles do something else that makes that new customer do a double take:

You can create your own million dollar product just by thinking about what I’ve just showed you!

If you’re looking for a “sure thing” business, please go back and re-read the last couple sections. That’s really all it takes – a big idea, presented to the market in such a way that it promises the solution to their problem, along with at least a hint of how they’re going to do it.

Of course, it helps if you sprinkle it with a little “magic” – suggesting to the audience they’re going to be part of something just a little underground, or at least unknown to them before they heard about it.

Like I said, why bother starting a business and struggling just as heard, or harder, than you do at a job?

Why not start with the million dollar idea and make life easy (and more profitable) for yourself?

You don’t have to work as hard as I did, either!

Being obsessive certainly helps in my day job as a cyber security analyst. For this project, I collected dozens of case studies of these kinds of million dollar products.

I broke down not only what worked, but examined the mechanisms hidden inside products from different industries.

Then I boiled them down into a series of principles I use to create and sell my own million dollar concepts.

Now that I’ve figured out the framework, I’m also having a lot more fun than I ever did doing this kind of work. Plus, because I’m using a scientific method, I get to do it in my spare time and on my terms.

And speaking of fun, probably the most enjoyable part of what I’ve created for myself are the series of mental exercises I use to “trigger” these million dollar breakthroughs.

Now this system, that I call,

“How to Create Million Dollar Products!”

is available to YOU!

When I took a breather from my marathon research and analysis session, I realized I had accumulated way more material than could be put into a single volume. It clocks in over a thousand pages!

And then I started thinking about cost – well, I didn’t want to be one of those guys selling $20,000 programs with a lot of hype and (mostly) trickery.

So I decided to package this offer in a way that is both easy to learn AND with an affordable way to pay:

Six Words Can Make You Rich! is published in 48 Special Reports, each issue containing the Principles, Case Studies and Exercises that will help you create and sell your own million dollar product. Each Report is designed to give you the right amount of creative raw material you need to work magic in your own enterprise.

And once you “get” the process you will find it is repeatable, over and over again, and can be applied in as many markets as you wish to conquer!

The best part is I’ve been able to keep it affordable, at just $197 a month.

PLUS – You get 4 Special Reports every month! They are mailed to you weekly – to keep your desire and creative imagination burning!

PLUS PLUS! If you’re not happy, you can cancel at any time, no questions asked! (Hard to do after you’ve already spent $20,000!)

Just fill in your details to get instant access!

My 3-point guarantee to you

Real Value – Every Special Report is a mini seminar on paper. I don’t hold back. You are paying me and I deliver. Your Special Reports are mailed to you every Monday.

Integrity – Call it a professional liability if you like, but my government work demands personal integrity. Usually when no one is watching. This project is no different.

I’m a husband and a father. (I came to the library to write this letter because my 3-year old boy is going through his “Ninja attack” phase). So if you have any questions or think I’m full of stuff, feel free to call my personal mobile, 703-341-9628.

Responsiveness – As stated above, if you want to cancel your subscription, I will personally process it and send you confirmation.

P.S. I’m going to give you the simple secret to creating million dollar products one more time – It is a combination of intention and research, relying on the creative imagination to deliver to you something brand new that appeals to an audience of your choosing. It’s not any more complicated than that. However, the process does require you to follow a plan, mostly so you don’t waste time or get stuck on lower level ideas. The Special Reports that make up Six Words Can Make You Rich! deliver everything you need to get to where you want to go in the quickest, most profitable way possible, go ahead and Subscribe Today!

Still curious?
Everything I’ve said so far comes down to this SHOCKING CLAIM:
You Can Write a Single Sentence that Makes a Million Dollars!

And it’s as simple as Six Words Can Make You Rich!

Don’t think you can make a million with Six Words Can Make You Rich? Read what these leading experts have to say about this approach:

Here’s what legendary copywriter Gary Halbert had to say about the idea behind Six Words Can Make You Rich!

“Which brings us to the question, “Are good ideas really all that important?” Not only are they important… they are CRUCIAL! Know this:

“Walking On The Beach And Coming Up With One Good Idea (If You Implement It) Is Worth More Than A Lifetime Of Hard Work!”

– From the Gary Halbert Letter

Here’s what information marketing pioneer Jerry Buchanan had to say about the idea behind Six Words Can Make You Rich!

“Every self-publishing entrepreneur of non-fiction How-To subjects knows that choosing the subject to be covered is the most important decision he can make to increase the mass-marketing appeal of the finished product … Well, almost.

Even more important than choosing the right subject is choosing a “Grabber of a Title” … which I will hereinafter refer to as a “GOAT.””

Here’s what marketing powerhouse Dan Kennedy had to say about the idea behind Six Words Can Make You Rich!

“A high concept product is something that, when you say it – like if it was a book you don’t really need to read the book; you could just read the cover and it had some impact and influence.

If you’ve never read the book, you’ve at least got the idea that there is some connection between thinking and being rich.

A high concept product is often very, very useful because people get it and are intrigued quickly and easily.”

Join the exclusive club of people who love what they do!